When I first heard that the Pam Am games were coming to Toronto, my first thought was “Oh great, traffic is going to SUCK”, as if that were the biggest impact it would have on the city. I was probably right about the traffic, though we don’t drive into Toronto all that often so it doesn’t really affect us. But then when tickets became available, we took a look and found that they were quite reasonable. We figured this is a once-in-a-lifetime sort of event, so we should check it out. Toronto has bid for the Olympics in the past and may be bidding again in the future, but they’re talking 2024. Ryan will turn 25 that year. 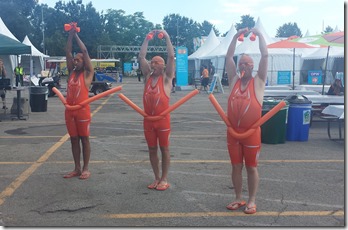 We had each of the boys choose an event that they wanted to see. After looking over the events, Ryan chose handball and Nicky chose table tennis. I added in beach volleyball since I’ve been playing during the summer at work for the past 5-6 years. We ended up getting tickets for those three events, and for Christmas, I got tickets from my sister to see the soccer final with my dad. The tickets were $20 each (for each event) for adults and $10 each for the boys, so really not that bad. There were better seats for more money and the medal round games were more expensive too, but we figured we’re seeing the best players in the world anyway. If we end up seeing the 7th best handball team against the 8th best rather than #1 and #2, we won’t know the difference.

I was a little concerned about transportation, but it was not a problem at all. I knew the Pam Am organizers had arranged with the GO Train people as well as a bunch of municipal transit authorities (TTC, Mississauga, Markham, Hamilton, etc.) for signage and extra routes and things like that to make it easy to get places without driving, but I only found out a week or two before that it was all free as long as you had a ticket for a Pam Am event. This, plus the fact that 2 of the 4 events we were going to see were at Exhibition place, made it much easier. The table tennis was up in Markham and we could have taken the GO train there as well, but that would have been at least two hours each way so we ended up driving there. The soccer was in Hamilton, so I drove to a parking lot at McMaster (and pre-booked my spot, which cost me $5 instead of $10), where they had arranged busses to get you to the stadium.

On to the events we saw.

As I said, I play beach volleyball in the summer so I was excited to be able to watch the best beach volleyball players in the world. We took the train in to Exhibition Place where the Chevrolet Beach Volleyball Centre is located, right behind BMO Field. Obviously this is an outdoor venue, so we were a little worried that we’d all end up with heatstroke or sunburn, or we’d have to leave the game early because we were just too hot. Fortunately, we got lucky with the weather; it was mid-high 20’s and partly cloudy all day, so we didn’t bake in the sun. This was especially lucky since the previous two days were hotter and way more humid.

As I mentioned we bought our tickets months in advance, so we had no idea who we were going to see. It turned out to be a women’s qualifying match between Colombia and Costa Rica. The Colombians took game one, then Costa Rica came back and won game two, and the tiebreaker was close all the way until Colombia pulled it out right at the end. Obviously the teams were pretty evenly matched, and that made for some exciting games. One thing I noticed about these women – almost no volleys. I was expecting “bump-set-spike”, “bump-set-spike”, “bump-set-spike” on almost every rally and that’s what we got, but the sets were almost always bumps, not volleys.

Once the match was over, we expected to head out and tour Pan Am park a little bit before taking the train home. But before we left, we noticed that nobody else was leaving. A few people did get up and head to the stairs, but it looked like the same number of people who might head to the washrooms or go grab a drink at halftime. The guy next to me was reading something on his phone but hadn’t made any move to leave so I asked him, “There’s just one match, right?” He said no, your ticket gets you two matches. There was nothing on the ticket that indicated this, so we were pleasantly surprised and were happy to stick around for a second.

The second match was a men’s match between Puerto Rico and Uruguay. This one wasn’t quite as close as the first one; Uruguay dominated both games and we never got to a third game. The men volleyed a little more often than the women, but I thought some of the volleys were a little too close to catch-and-toss. Indeed, two men were called for lifts, while none of the women were. The men also jumped higher than the women, which was evident in the number of spikes that hit the net (the women had more) or successful blocks (the men had more). Both the men and women had a few beautiful rally-saving dives and players going way out of bounds to play an errant ball coming from such a dive – and even when playing one of those, they were still trying to set their teammate up for the spike.

My goal of watching the best players in the world and picking up a few tips to improve my own game may have been a little optimistic. Here are some of the tips I got: “don’t make mistakes”, “hit it where you intend to hit it”, and “don’t change your mind from bump to volley when the ball is only 2 feet away”. Seriously though, I did get one tip – bump further up your arms. When I bump, I have my thumbs overtop of my open right palm and I try to hit it on the base of my hands or my wrists. The Pan Am players were bumping it much further up their arms, halfway to their elbows in many cases. The part of your arms that hits the ball is much flatter in that case, so you have more control and less chance of hitting it way off to the right or left. 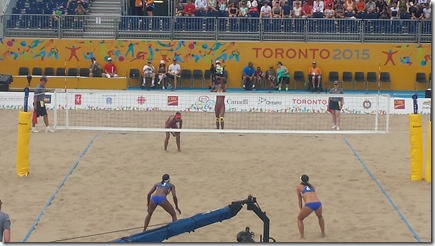 I have two more articles in this series. The next will cover handball and the last will cover table tennis and soccer.