Gail was looking for some crafty stuff for Ryan to use in a school project, and came across some pencil crayons she must have bought during high school. On the front of the packaging read “You could WIN one of 6 Commodore 64 home computer systems”. 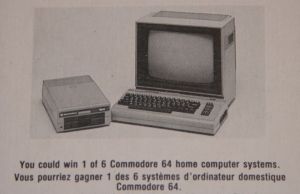 $420 for a computer with a 1 MHz 8-bit processor, 38KB of usable RAM, 16 colours, and no persistent storage. You can now get a 4 GB USB drive the size of your finger for $20, which holds the equivalent of over 65,000 Commodore 64’s. The processor is vastly inferior to the one in your average kid’s $4 digital watch.

This shouldn’t be surprising, since we are talking about 23-year-old technology. But once I realize that I shouldn’t be surprised, it just makes me feel old — especially since my first computer was the the Commodore VIC-20, the predecessor to the Commodore 64, which had all of 3.5 KB of usable RAM. But I had a 16KB expansion cartridge, giving me an astounding twenty kilobytes of memory. They even had a 32KB expansion cartridge, but come on. Who could use up 32 KB of memory?