A surprising number of people believe in something they call chemtrails. This is the belief that the cloud-like lines you see forming behind airplanes are not contrails or vapor trails (i.e. trails of water crystals that form due to water in the engine exhaust and very cold air) but chemicals intentionally released by the airliners. These people believe that the “government” (whether it’s the US government or all governments or that of the “New World Order”) forces airlines to secretly install distribution devices on all aircraft and then spread mind-controlling chemicals over the general public.

Yes, this is really a thing that people believe. 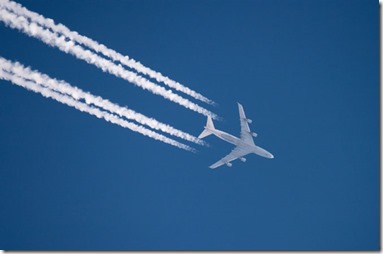 Once again, we have a huge conspiracy theory that (a) would have to include thousands of people over many decades with no whistleblowers, (b) has no compelling evidence at all, and (c) has no real reason for existing. It’s not like there’s some huge mystery out there to which this idea is a solution. The followers of this theory want you to believe that the government (again, it must be all governments working together since these trails appear over every country) has the ability to create chemicals that help them control people’s minds but are unable to prevent the chemicals from turning white when dispersed.

Unanswered questions: Why are the people blowing the whistle not being silenced? Why are the web sites allowed to stay active? Why are there chemtrails over the middle of the ocean? Why do pilots and mechanics agree to this when such mind-control chemicals would affect them and their families as well? Why would airlines agree to this at all? Do people really believe that the governments of North Korea and the US are co-operating in this?

But the best argument against this idea is that spreading mind-control chemicals from an airplane seven miles above the ground is just about the least effective way to do it since it would disperse so widely as to be ineffective. If you really wanted to spread mind-controlling chemicals to the general public, a much better way would be to add it to the water supply. If anyone asks, you tell them it’s for their own good, like maybe it’s designed to keep people’s teeth healt—