When I first joined Facebook over ten years ago, I though it would be a fun little diversion. Over time, it turned into a invaluable communications tool, particularly with friends and family far away. I have a number of friends who have moved to Alberta, BC, and the US and I’m sure that without Facebook, I would have lost touch with many of them. I also grew up thousands of miles away from my cousins in Scotland and England (and later, Australia) and so I don’t know them very well, but I’m able to touch base with them and get to know them, to some extent, thanks to Facebook. I’m sure this is the case for hundreds of millions of other people worldwide.

One great thing about Facebook is that it allows you have direct conversations with your friends and also see what they’re talking about with other people. But that’s also a bad thing about Facebook. You see what your friends are saying and what their friends are saying, but nobody else. This sounds like what you would want. I want to hear and discuss my friends’ opinions on things. And why would I want to hear some random guy’s opinions on things if I don’t know him? 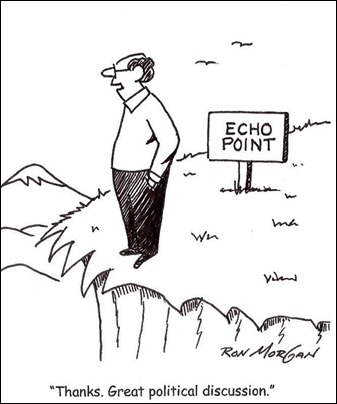 But by definition, your friends’ world views are generally similar to yours (or they wouldn’t be your friends), and their friends’ views are generally similar to theirs. Of course everyone’s different and friends can have different views on things but more often than not, you find yourself agreeing with your friends on many issues. This is not limited to Facebook – it also applies to Twitter, Instagram, and other social networks. Oh, and real life too.

The problem here is that social networks in general become what’s known as an echo chamber. When you post an opinion and see nothing but agreement, you start to think that this is a popular opinion, or even a consensus. But you’re only seeing your friends’ opinions and since most of your friends think the way you do, you are getting a skewed view of the population.

Take the most recent US election as an example. For months before the election, I saw many postings from friends talking about what a terrible choice Donald Trump would be for President, and I posted many such opinions myself. I saw some postings arguing the other way, but those were mostly reposts from my friends, along with a comment on how misguided the original posters were. I saw almost no pro-Trump postings directly from anyone I knew. In fact, I can only think of one person on my Facebook friends list who posted anything positive about Donald Trump. As a result, I started to believe that the vast majority of people were against Trump, and thus Hillary Clinton would win the election in a landslide.

Well, you probably don’t have to imagine, since the election results seemed to take everyone by surprise, whether they supported Clinton, Trump, or neither one. Since then, it’s been one surprise after another, though it really shouldn’t be since Trump is doing exactly what he told everyone he would do if elected. Many people, myself include, just couldn’t believe he’d actually get the chance, thanks to the echo chamber.

I don’t pretend to have a good solution for this problem. On Twitter, I do follow Donald Trump himself (both his personal account and @POTUS) just to see what he’s talking about. Before the election it was a source of humour because he couldn’t possibly win. Since the election, his tweets have been more of a source of anger and fear and usually make me shake my head, but I haven’t unfollowed. I did recently notice that a fairly prominent lacrosse coach was a Trump supporter, and I unfollowed him. He didn’t tweet much anyway so it wasn’t a huge deal. But by doing this I was simply strengthening my echo chamber, something I didn’t think of at the time. Maybe I need to revisit that strategy.